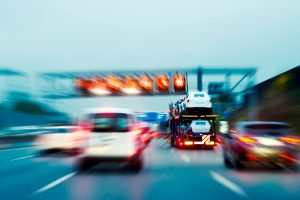 During the last four decades, South Dakota's speed limits have steadily increased. Two years ago, the maximum speed limit on many interstate highways in South Dakota was raised to 80 mph. So, are the state's highways more dangerous now? Our Sioux Falls, SD car accident attorneys examine the facts.

Why are speeding accidents more dangerous?

Speeding might seem like a minor traffic offense. But when speeding vehicles crash into cars, the consequences can often be far worse due to the increased speed and force of the vehicle crashing into another car, motorcycle, cyclist or pedestrian.

The main reason why speeding can be so dangerous is that drivers have less time to slow down and avoid an accident. And when speeding drivers do crash into other objects, the force of such accidents is worse due to the higher speed of the vehicle that caused the crash.

Prior to 1974, states had the right to set their own speed limits. Then in 1974, President Richard Nixon signed into law the Emergency Highway Energy Conservation Act, which established a new, national speed limit of 55 mph on all national highways. This changed was enacted in response to the 1973 oil embargo, which resulted in OPEC countries stopping oil shipments to the United States, Japan and Western Europe, according to history.com.

Like many other states, South Dakota has increased its speed limit steadily in recent decades. In 1995, the maximum speeding limit on South Dakota's interstate highways was raised from 55 mph to 65 mph. In 1996, that limit was raised to 75 mph, according to the Star-Tribune.

Then in April 2015, South Dakota raised the maximum speed limit to 80 mph on all interstate highways, which include:

As for other four-lane, divided highways in South Dakota, the maximum speed remains 65 mph to 70 mph depending on the highway, according to an Inforum.com news article.

Since speed limits started increasing nationwide in 1995, speed-related fatalities resulted in an additional 33,000 deaths, according to a 2016 study conducted by Insurance Institute for Highway Safety, Highway Loss Data Institute.

"Although fatality rates fell during the study period, they would have been much lower if not for states' decisions to raise speed limits," Charles Farmer, IIHS vice president for research and statistical services and the author of the study, said.

The estimated 33,000 deaths are based on an analysis of traffic fatality statistics between 1993 and 2013. In particular, IIHS HLDI researchers estimate that a 5 mph increase in the speed limit resulted in a 4 percent increase of fatalities.

So, what effect has South Dakota's speed limit had on the number of fatalities and car crashes? As statistics dating back to 1986 compiled by the South Dakota Department of Public Safety reveal, the picture is more complicated than you might expect. The maximum speed limits on many highways in South Dakota were raised in 1995 (to 65 mph), 1996 (to 75 mph) and 2015 (to 80 mph).

The total number of motor vehicle fatalities in South Dakota in 1994, 2014 and those three years were:

While the figures for 2016 are not yet finalized, all signs point to a historic decrease in fatalities compared to the 2015 numbers. What these numbers show is that, while speed is an important factor in fatal auto accidents, it is one factor among many. At any speed, proper use of safety equipment such as seatbelts and obeying the rules of the road will help to keep drivers and passengers safer, and motorists have a responsibility to do their part to avoid crashes.

South Dakota has a fault-based car insurance system. That means the at-fault driver compensates the other driver after a motor vehicle accident. But the laws surrounding liability can be complex and it is often more difficult than anticipated for a motorist to recover compensation.

Many speeding drivers deny speeding after an accident. An experienced attorney can gather the evidence you need to demonstrate that the speeding driver caused your crash. Whether it's analyzing your South Dakota motor vehicle accident report or visiting the actual accident site, every piece of evidence can help build a stronger legal case. Contact Northern Plains Justice, LLP, to learn more about how we can assist you with your accident.