Bicyclists: Be Aware of “Dooring” Risk on the Road 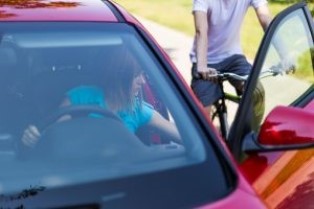 With more and more Sioux Falls residents choosing a bicycle as their preferred mode of transportation, both riders and drivers need to take extra precautions to ensure safety for all.

Knowing the rules of the road and sharing the road are the two biggest ways to be safe, but it’s the small details. Checking the road before opening your car door can make the biggest difference.

“Doorings”—hitting a cyclist on the road by opening a vehicle door—is a real thing. It’s become such a big concern that Uber recently wrote about it on its blog, and the company is launching a campaign to teach riders how to avoid doorings.

Dooring Incidents on the Rise for Sioux Falls Bicyclists

There are some indications that the increase in bicyclist deaths correspond with an increase in the number of cyclists overall, but the data is limited.

The Dutch Reach: The Door Opening Technique that Could Save You from an Accident

So what is the solution? Traffic experts emphasize prevention and education. Every driving school graduate should get out of a car with the automatic routine of glancing in the rear-view mirror to look for cars, motorbikes, and cyclists coming from behind, making sure they over the shoulder before getting out of the car. This is part of what is call the "Dutch Reach," which advises both drivers and passengers to open the door with the far hand. This movement will inevitably make them turn their head and check the situation directly behind the car.

If you are a Sioux Falls bicyclist who was injured by an open vehicle door while sharing the road or involved in any other type of crash, the legal team at Northern Plains Justice, LLP can help you understand your rights and what compensation you may be entitled to. Our personal injury attorneys investigate all types of bicycle crashes and work tirelessly to help injured parties recover damages. Contact us today to schedule your free initial consultation.