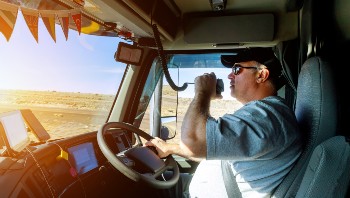 Commercial truck drivers are held to a higher standard of safety and care than the average motorist. Whereas other drivers are considered legally under the influence with a blood alcohol concentration (BAC) of 0.08 percent, the Federal Motor Carrier Safety Administration (FMCSA) has set 0.04 percent as the limit for a commercial vehicle operator.

The FMCSA has also mandated that:

Some drivers, however, still use substances on the job and change jobs frequently to avoid testing. When such a driver causes an accident with a regular passenger car, the resulting injuries can be catastrophic, especially if the trucker is hauling dangerous cargo like gasoline or driving a bus full of passengers.

Driving under the influence (DUI) is negligence per se for a commercial trucker, so the results of a sobriety test or drug/alcohol screening that proves liability are very important evidence for your insurance claim if you’re injured by an impaired trucker. A commercial driver who is pulled over or involved in an accident and refuses to take a blood alcohol test can be automatically charged with DUI.

Multiple Defendants Could Be Responsible for Your Damages

FMCSA drug and alcohol regulations apply not only to commercial truck drivers but also to:

If you’re the victim of an accident caused by an at-fault trucker, one or more of the entities above could be partially or fully responsible for your damages.

What to Do After an Accident

Due to the differences in size and weight between an 18-wheeler (up to 80,000 pounds fully loaded) and a passenger car (approximately 4,000 pounds), a high-speed underride/override wreck or any other collision involving the two can result in catastrophic injuries to the occupants of the smaller vehicle.

Claims for serious injuries from a wreck with an impaired trucker are thus very expensive ones for the trucker’s insurance company, which has an obligation to stay profitable and earn money for its shareholders. It does so by collecting as much as it can in premiums and paying out as little as possible.

You may be contacted after your accident by an insurance adjuster claiming to be concerned about your condition and asking for information about the accident and your injuries. The adjuster might request access to your medical records or ask you to give a recorded statement about your crash. You should refuse all such requests. The adjuster is really just trying to:

You should say no to all such requests, give the adjuster only your basic information, and refer all communication to your attorney.

Have You Been Injured by an Impaired Trucker in South Dakota?

An experienced truck accident lawyer can help you get fair compensation for damages by: