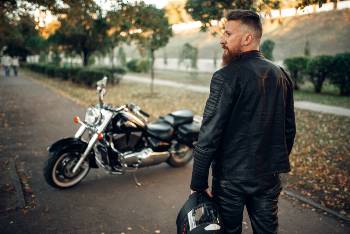 Motorcycle accidents often occur because bikes are smaller and harder to see than other vehicles. Since a motorcyclist has no physical protection beyond a helmet and protective clothing, a rider involved in an accident with a larger vehicle is extremely vulnerable. It’s not surprising that more than 80 percent of motorcyclists involved in wrecks across the country sustain injuries.

One of the most common bike crash injuries is avulsion, commonly known as “road rash,” which is damage to the skin resulting from contact with the road surface when a rider falls off a moving motorcycle in an accident. Like burn injuries, road rash injuries are categorized by degree:

Scraping/reddening of the skin and minor bleeding.

Breaking of the epidermis (top layer of skin). Debris from the road surface can lead to infection and scars.

Breaking of the dermis (the underlying layer of skin), which can expose tendons, muscles, fat, or bone. Infection is likely and scarring is probable.

Physical contact with the road can also result in:

The rider sustains bruising or bone/muscle damage from being trapped between the bike and the road.

The rider suffers a bleeding cut, gash, or laceration that can lead to permanent scarring or disfigurement.

Factors That Affect the Severity of Road Rash

Several factors determine how serious your road rash is:

Because a bike is generally traveling at a speed equivalent to the speed of the cars around it when a crash occurs, second- and third-degree road rash are more common than first-degree. A rider who suffers second- or third-degree rash might also sustain other injuries from the intensity of the contact with the other vehicle and/or the road surface:

Even if you don’t think you’re seriously injured after your motorcycle wreck, you should see a doctor as soon as possible. The adrenaline from the trauma of the crash could mask your pain in the immediate aftermath. A physician’s exam and diagnostic tests might reveal injuries you can’t yet feel. Early treatment and diagnosis lead to quicker recovery and fewer complications. A medical exam right after your wreck also documents the injuries you’ve suffered in the crash, giving you crucial proof for your insurance claim/lawsuit that you were injured as a result of the motorcycle accident.

First-degree road rash is a minor injury that can be treated by cleaning the wound and applying a bandage. Second-degree road rash is more serious and more painful. It’s very important to keep a second-degree rash clean to prevent infection. Third-degree rash, which is likely to result from an accident that occurs at full speed, is dangerous and tremendously painful, requiring immediate medical attention. There’s an increased risk of infection and the possibility of:

The Role of Your Attorney

If you sustain road rash in a motorcycle accident caused by someone else, South Dakota law allows you to file a claim against the at-fault driver’s insurance company for your damages:

If your wreck causes little damage to your bike, minor injury, and low medical expenses, you might not need an attorney to pursue your claim as long as it’s not disputed by the insurer. Road rash sustained in a bike crash, however, can often result serious in long-term health issues:

Such issues make for an expensive claim against the negligent driver’s insurance company, which is in business to stay profitable and might try to dispute/deny your claim to save money for the company. When this happens, you’re most likely to get a fair settlement with the help of an experienced motorcycle accident lawyer who can:

Have You Sustained Road Rash in a South Dakota Motorcycle Crash?

An experienced motorcycle accident attorney can help you seek fair compensation for damages. Contact us online, start a chat, or call us at 605-306-4100 to schedule a free consultation. You pay no attorney fees until we win your case.