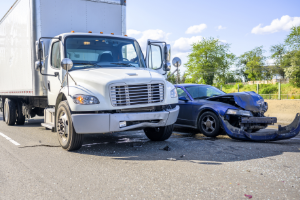 Rear-end collisions account for nearly 20% of all semi-truck accidents nationwide. They’re most likely to occur on major highways and in heavy, moving traffic during the daylight hours, but fatal rear-end truck wrecks generally occur around dusk or later at night. About half of all rear-end crashes take place on divided highways, and approximately 10% happen on local streets and roads, often at intersections.

A fully loaded 18-wheeler can weigh up to 80,000 pounds and requires the length of a football field to come to a stop when traveling at 55 mph. Due to the design of truck brakes and springs, an empty commercial truck is even harder to stop. A 4,000-pound passenger vehicle, on the other hand, can stop very quickly and is extremely vulnerable to a tractor-trailer traveling closely behind, especially at high speeds.

Commercial truck drivers and trucking companies have a strict duty to operate safely, keep trucks well maintained, and take precautions to avoid mishaps on the road. Nonetheless, the pressure placed on truckers to meet tight delivery deadlines can lead to negligent driving habits that cause accidents.

Some common causes of rear-end truck wrecks are:

The faster a truck is moving, the more time it takes to stop when traveling behind a car.

An impatient truck driver following the car ahead too closely is likely to rear-end that car if it slows down or stops quickly.

Ice, snow, rain, wind, and fog require slower and more careful driving than clear weather and dry roads do. A truck driver with a tight schedule might neglect to make the necessary adjustments for road conditions.

Tractor-trailers have large blind spots that the trucker must check carefully when passing/changing lanes. Doing so could take the trucker’s attention off the vehicle ahead and cause a rear-end wreck.

A sleep-deprived driver might not be alert behind the wheel and could cause a rear-end wreck by falling asleep.

Talking/texting on a phone, eating/drinking, or checking a GPS device might take the trucker’s eyes off the road just long enough to cause a rear-end crash.

An overweight/improperly loaded truck is unstable and hard to control.

The size/weight difference between an 18-wheeler and a passenger car generally results in major damage to the smaller vehicle and severe injuries to its occupants:

If you’re injured in a rear-end truck accident, the trucker is almost certainly at fault and liable for your damages, which are likely to be high. South Dakota law allows you to file a claim against the trucker’s insurance company for your:

The Need for an Attorney After a Truck Accident

A rear-end accident caused by a negligent truck driver can cost the insurance company a lot of money. Its adjusters and lawyers are likely to dispute and devalue your claim to keep the company profitable. Even on your best day, you’re probably no match for them. If you’re recovering from serious injuries, you really don’t stand a chance of getting fair compensation on your own. They’re master negotiators who will offer you a quick, low settlement because they know you won’t sue them in court without a lawyer. If, however, they know you have an attorney representing you, they have an incentive to treat you fairly. They know your lawyer will:

You’re apt to get a significantly higher award with an attorney than without one, so your legal representation should more than pay for itself.

Have You Been Rear-Ended by a Truck in South Dakota? Contact Our Truck Accident Attorneys Today.

An experienced truck accident lawyer can help you seek fair compensation from one or more at-fault parties. Contact us online or call us at 605-306-4100 to schedule a free consultation. You pay no attorney fees until we win your case.