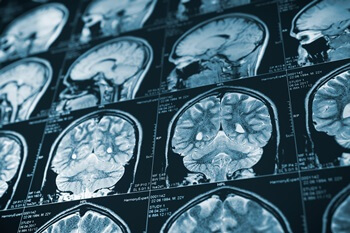 normal brain function is disrupted by an impact to the head or a piercing of the brain tissue by a sharp object. Because a motorcyclist has no physical protection beyond a helmet and clothing, such a serious injury is much more likely to occur in an accident involving a motorcycle and a larger vehicle than it is in a crash between two cars. According to the National Highway Traffic Safety Administration (NHTSA), head injury is the number-one cause of fatality or disability in motorcycle accidents, and eight out of ten bike crashes lead to injury or death of the rider(s).

A closed head injury takes place when an external impact jolts the brain, causing it to bleed or swell inside the skull. A more serious open head injury results from a skull fracture or penetration of the skull. The resulting TBI could fall into one of three categories:

A forceful impact to the head or penetration by a sharp object can cause irreversible brain damage or death.

There is no penetration of the brain. Instead, the external impact to the skull can leave the victim unconscious for a few hours and perhaps cause persistent physical and cognitive problems for an indefinite period of time thereafter.

The victim generally loses consciousness for a short time and wakes up confused and disoriented. A mild TBI might not be revealed by diagnostic tests but could surface in a mental function exam administered by a physician.

These three general categories include several specific types of TBIs:

Broken blood vessels at the point of impact or on the opposite side of the head cause a mild to severe brain bruise.

This mild TBI might not show up in a magnetic resonance imaging (MRI) test but could be revealed by a doctor’s exam.

Blood from the brain causes pressure inside the skull, sometimes leading to a coma or death.

When a collision between a motorcycle and a larger vehicle fractures the biker’s skull, bone fragments can pierce the brain tissue and cause permanent damage.

Brain cells die quickly due to a lack of oxygenated blood when a stroke, heart attack, or blood clot interrupts the flow of blood to the brain.

A whiplash injury can rip the tissues between the brain stem and the spinal cord, causing brain damage or death.

Poison, suffocation, drowning, or ingestion of carbon dioxide can reduce the amount of blood flowing to the brain.

Seizures, blood clots, nausea, headache, memory problems, anger issues, extreme fatigue, loss of consciousness, nausea, and problems with standing and walking are among the early symptoms of a TBI. Even if you’re not aware of any such symptoms, you should seek medical attention immediately after being involved in a bike crash to determine whether you’ve suffered a TBI, which can only get worse if left undiagnosed and untreated.

Have You Sustained a TBI in a South Dakota Motorcycle Accident?

If so, you’re entitled to file a claim against the at-fault driver’s insurer for your medical bills, property damage, lost income, and pain and suffering. Because TBIs in particular and motorcycle accident injuries in general can be catastrophic and lead to exorbitant medical bills, a long recovery, significant lost wages, and even reduced future earning potential, the insurance company is likely to dispute your claim. An adjuster might also offer you a fast, low settlement before you’ve even recovered enough to know what your long-term medical bills will be. You should never accept such an offer without consulting a lawyer first. An experienced motorcycle accident attorney can help you seek fair compensation by: