When another driver suddenly swerves into your lane, you may not have enough time to react. Roadway departures happen without warning and often result in serious crashes on high-speed roadways. More than half of all traffic fatalities across the United States from 2015-2017 were roadway departures, according to the Federal Highway Administration.

When sideswiped by another vehicle, drivers are at risk of: 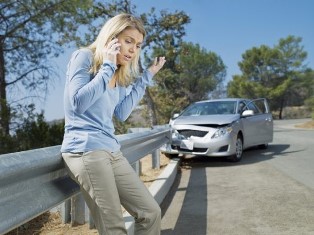 Roadway departures can be catastrophic, and someone who is run off the road by another driver may be severely injured or killed. In the event you're involved in a roadway departure crash, it's important not to panic. Take a moment to access the situation, survey your surroundings, and check to ensure that all car occupants are OK. Call 911 immediately if you notice any serious injuries or if the driver who hit you took off. Always call the police, even if the crash was minor.

Exchange insurance information with the at-fault driver and avoid arguing or discussing who was at fault. It's best to stay as neutral as possible, even if you know that the other driver engaged in outright negligent or reckless behavior.

If you're able to get out of your car, be sure to take pictures of the crash scene, including:

If any witnesses are present, take down their names and contact information and ask them what they saw. Their statements can help you when filing a car accident claim.

Pedestrians and bicyclists can be struck in two-car or single-car roadway departures. It can happen while legally cycling on the side of the road, walking on a sidewalk, or standing at a bus stop. You could be struck by:

If you're a pedestrian or bicyclist who was struck in a roadway departure, you can take legal action against:

When the at-Fault Driver Flees the Scene

South Dakota law requires drivers to stay at the scene of a crash. Failure to do so can result in a misdemeanor charge. If a hit-and-run crash involved someone's injury or death, the at-fault driver can be charged with a felony.

Even if the driver fled the scene of the crash, you may still be able to collect damages. South Dakota law requires that all drivers carry uninsured and underinsured motorist coverage (UM/UIM). This applies to both uninsured drivers and hit-and-run crashes and pays for medical expenses accrued from your crash.

The Sioux Falls car accident attorneys at Northern Plains Justice, LLP can help you pursue a legal claim. We have years of experience and a wealth of legal knowledge helping injured people maximize their compensation. Contact us online to find out how we can help you.