This St. Patrick’s Day, thousands will congregate throughout greater Sioux Falls to celebrate. For most adults, that means drinking. St Patrick’s Day is the fourth most popular day to drink alcohol—following Independence Day, Christmas, and New Year’s Eve. 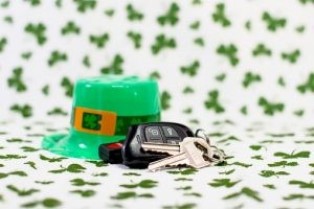 While it's legal to drink and drive responsibly (as long as you are not impaired and your BAC is under 0.08), it's illegal and dangerous to drive while under the influence of alcohol. WalletHub reports that the average rate of fatalities caused by drunk driving during St. Patrick’s Day is 1 every 36 minutes. Moreover, roughly 75 percent of fatal crashes involve motorists who have consumed twice the legal limit.

According to data compiled by Insurify between 2016-2019, South Dakota ranked third among the top ten states with the highest DUI rates. Our state not only has one of the lowest populations in the U.S., it has 1.92 times as many drunk drivers on the road as the national average. The findings include:

Those who plan on consuming alcohol this St. Patrick’s Day shouldn’t get behind the wheel. There are other options. Last year, AAA offered a free Tipsy Tow service during the holiday between 12 p.m. - 4 a.m. in Sioux Falls. For anyone who had too much to drink, the service would tow their vehicle and drive them home. The service was offered to both AAA members and non-members.

Last year, local and state law enforcement successfully did their part to keep drunk drivers off the road. This year, we can expect them to do the same. Unfortunately, many drunk drivers will go under the radar. When their reckless behavior puts someone else’s life at risk, they should be held accountable.

If you or a loved one suffered injuries in an auto accident caused by a drunk driver, the aftermath can be overwhelming and frustrating. It’s important that your right to compensation is upheld. An experienced Sioux Falls car accident attorney will gladly review the details surrounding your crash and work tirelessly to devise a solid case against the at-fault driver and his or her insurance company.

You shouldn’t have to pay for your medical expenses and lost wages out of your own pocket. You shouldn’t have to endure prolonged suffering because of someone else’s negligent actions. You deserve better. Contact Northern Plains Justice, LLP to discuss your legal options.