How to Prevent Distracted Driving Near Emergency Vehicles

When a roadside emergency occurs, the flashing sirens and horrific crash scenes often spark curiosity. Everyone wants to see what is happening. Traffic slows down. Heads turn.

What’s worse, some drivers want to document the action by taking pictures and videos—some going as far as to post them on social media in hopes of receiving likes. This form of distraction can result in another crash and even put emergency responders at risk of being struck. 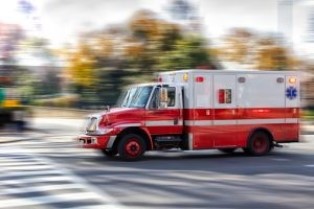 How Prevalent Is Distracted Driving Around Emergency Vehicles?

The National Safety Council (NSC) and Emergency Responder Safety Institute recently released a survey that found 71 percent of drivers in the United States took photos and/or videos when approaching or passing emergency responders on the side of the road. It doesn’t matter whether it was a serious crash, a fire, or just a routine traffic stop.

Another 60 percent of drivers reportedly posted the images or videos they took on social media, and 66 percent sent emails.

It should be no surprise that this type of behavior would result in a crash. The survey also found that 16 percent of respondents reported either striking or nearly striking an emergency responder or stopped emergency vehicle while distracted.

In contrast to the distracted behavior reported in the survey, 89 percent of respondents said that distracted driving is a leading risk to emergency responders.

Nick Smith, interim president and CEO of NSC, cautions drivers to put down their phones when approaching roadside emergencies.

“Our emergency responders deserve the highest levels of protection as they grapple with situations that are not only tactically difficult but also emotionally taxing,” he said. “Save your communications for off the road; disconnect and just drive.”

Whether you’re an emergency responder or other road user injured in a crash caused by a distracted driver, it’s critical that you discuss your matter with an experienced Sioux Falls car accident attorney.

The legal team at Northern Plains Justice will investigate the cause of your crash and use the evidence we find to hold negligent drivers accountable. For example, if the driver who caused your crash was taking photos and posting them to social media, the evidence is clear as day. There should be no dispute who was at fault.

To learn how we can help, contact us today.